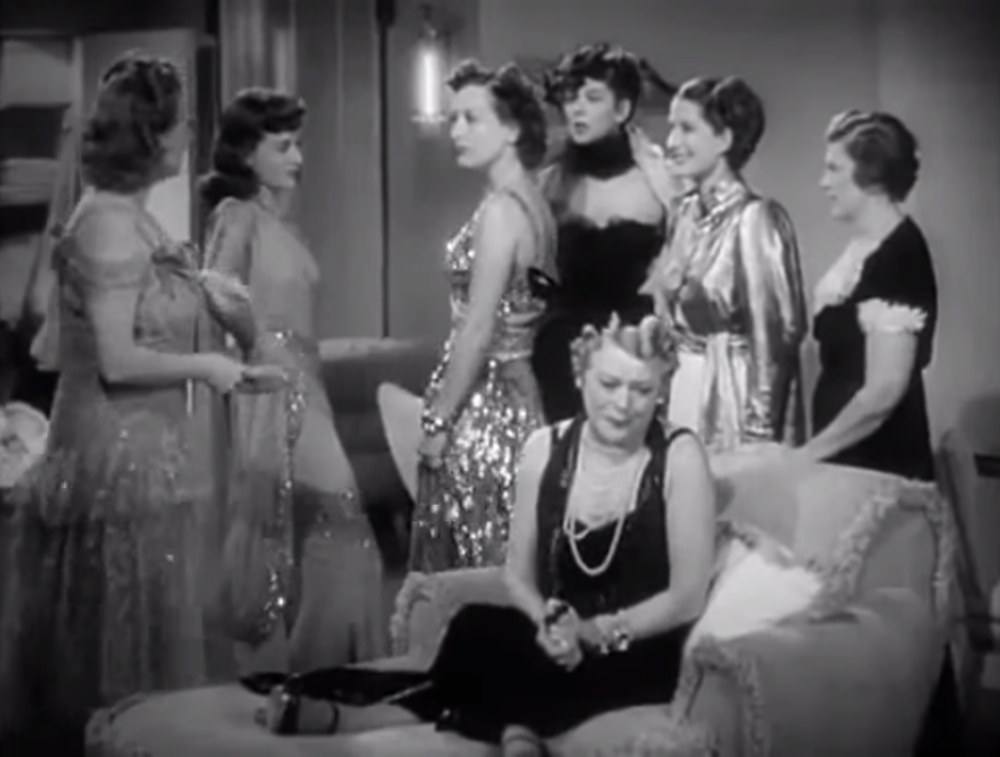 The film: Ignore the “toothless” 2008 remake—everyone knows the classic 1939 version is the real thing. Based on the play by the same name, “The Women” and its star-studded ensemble bring Clare Booth Luce’s tale of high-stakes, high-society romance to the screen.

The conversation: BechdelTest.com has a fascinating back and forth on whether or not “The Women” makes the cut. Given that there are plenty of lines where the characters discuss family, fashion, beauty routines, everyday life and parent-child relationships, I’m giving it a pass.

The real deal: But passing the Bechdel test doesn’t mean “The Women” is a feminist film by any stretch of the imagination. Neither does featuring a cast entirely of women with no men appearing onscreen for the film’s entire 133 minutes (of black and white with one sequence in color).

The tagline on the 1939 poster (which made it on to my DVD copy) is “It’s all about men,” just in case naming the film “The Women” was a huge turn-off for you. The trailer boasts that it’s based on a play with a stage cast of “135 women with nothing on their minds but men!” and tells you to rush to the theaters to “see them with their hair down and their claws out.” The opening credits feature an animal comparable to each woman in the cast, promoting the typical angel-whore dichotomy by making Norma Shearer as loving wife Mary a doe and Joan Crawford as trashy shopgirl Crystal Allen a spotted leopard on the prowl.

(Warning: Spoilers from the year “The Wizard of Oz” was released ahead.)

“Reno’s full of women who have their pride, sweetheart.”

Beyond these overtly sexist touches, the film’s themes at times promote a painfully subjugated view of women. When Shearer’s Mary discovers her beloved husband is having an affair, her mother advises her to “keep still,” indicating that she shouldn’t confront him about it.

“This is today—Stephen and I are equals,” Mary protests, but the lesson she learns over the course of the film seems to contradict that idea.

Peggy (played by a wide-eyed Joan Fontaine) is another woman whose marriage lands on the rocks. In her case, she wanted more independence and fought with her husband over purchasing a car with her own income. She heads to Reno to get a divorce but then discovers that she’s pregnant. Peggy calls her husband to tell him, and they happily reconcile.

“When I get back, I’m going to do everything John says,” she rhapsodizes to another character.

The conservative in me is happy at this resolution because a whole family is kept together, but the feminist in me balks at the mindset shift that occurs, putting Peggy “in her place” as the meek little wife.

Mary seems to learn a similar lesson. Her husband’s affair with the girl at the perfume counter is viewed as partly her fault for not managing to keep her man, while their eventual reconciliation is portrayed as the outcome of her decision to lay down her “pride.” The impetus is placed on women to be the responsible, loving, nurturing caretakers who must forgive men when they just can’t help themselves.

It’s impossible to examine an early Hollywood film like “The Women” without adding some context. Shearer, one of MGM’s biggest stars during its golden age, was a determined figure in a time when all stars and especially women were often oppressed and manipulated by the studio system. Known as both a driven actress and a beloved wife, Shearer was married to MGM film executive Irving Thalberg; she and the “Boy Wonder” spent a decade as a power team in the film world until his untimely death of pneumonia in 1937.

She may have been famous for her perfect profile, but Shearer made her mark on film in ways that had nothing to do with her looks. The “queen of pre-code films,” she pushed the envelope in movies like 1930’s “The Divorcée,” which scandalized audiences with its depiction of a woman who “balances the accounts” after her husband cheats on her. The performance scored Shearer an Oscar—shortly before the Hays code came down hard to censor anything so risqué.

Shearer reportedly campaigned for the groundbreaking part and took the reins for other roles in her 20-year career, working hard both onscreen and behind the scenes to complete “Marie Antoinette,” her first film after Thalberg’s death. She paved the way for more complex female characters onscreen in an era where women were virgins or whores, nothing in between.

“The Women” as a stepping stone

I hope I’m not reading too much into this 1938 Variety review, which dismisses “The Women” and its story as “essentially lightweight and trivial,” by calling that attitude sexist. “The Women” may feature a lot of catfighting (sometimes almost literally), but it’s ultimately a film about family, love, infidelity, loss and redemption. Such universally and essentially human themes should never be labeled “trivial” simply because the story is played out by a cast of women.

Despite its cringe-worthy moments of sexism, “The Women” was an important stepping stone when it comes to the evolution of onscreen portrayals of women. Shearer, Crawford, Rosalind Russell and the rest of the cast showed 1939 audiences that women can carry an entire film on their own and be pretty damn entertaining during the process.