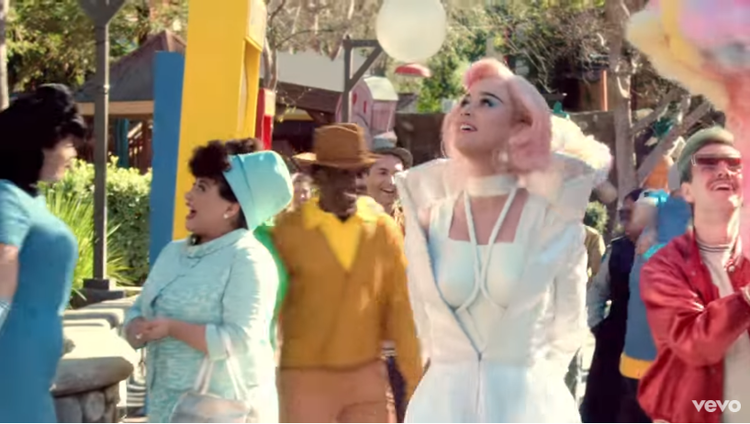 Come back, cotton candy queen. We miss you.

Earlier this month, Perry announced the “era of Purposeful Pop” … just in case 2016 hadn’t politicized every aspect of your life already.

Remember when Perry kissed a girl and made cherry chapstick sexy? When she scandalized both pearl-clutching conservatives and politically correct liberals with the tongue-in-cheek “Ur So Gay”? Or frolicked in a Candyland world as a (literally) sugar-coated California girl? Or lived a teenage dream in skintight jeans?

Don’t look for that Perry in the “Chained to the Rhythm” music video, a self-serious vision of a dystopian all-American amusement park. The former Hillary Clinton surrogate has her wokeness on full display, telling us that we’re “so comfortable / we cannot see the trouble” and instead we should realize that our favorite songs are only part of “the distortion.”

Perry obviously has every right to use her art as a platform if she wants to. But the politicization of everything gives us so few outlets for pure escapism, and I can’t help but miss the fun, glossy, silly, carefree worlds she created in her earlier music. “Chained to the Rhythm” has some catchy moments, partly thanks to the Max Martin touch, but it can’t compare to the effortless fun, visual storytelling and undeniable hooks in something like Perry’s “Waking Up in Vegas” or “Last Friday Night.”

Along with denying her audience the frothy escapism they’ve come to love, Perry’s mistaken idea that pop needs politics to be meaningful ultimately sells herself and the human experience short.

Go back and listen to her ache on “Lost,” a track on her first record documenting her loneliness and fear as she struggles to break into the music industry. Or “The One That Got Away” from her “Teenage Dream” album, a hit song telling a story of great love and great loss that anyone who has similarly loved and lost will understand.

These stories are powerful.

Dare I say … much more powerful than a former political surrogate adding one more think piece to the pile.