Beyond the Bechdel Test: ‘Jurassic World’ 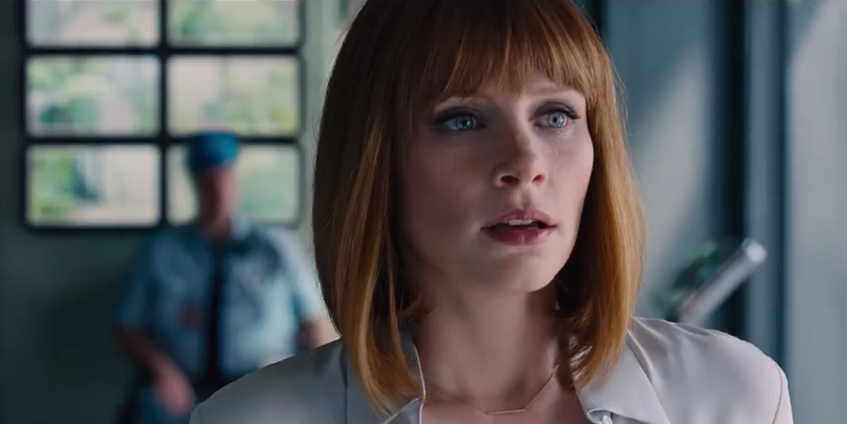 The film: With one of the biggest openings of all time, “Jurassic World” was easily the hit of the summer. It now ranks up there in the box office stratosphere with huge hits like “The Avengers” and “Avatar.” Riding on the premise “Chris Pratt + dinosaurs,” it’s thinly plotted but still tons of fun.

The conversation: I saw “Jurassic World” earlier this summer and was trying to remember if it technically passed the test or not. According to BechdelTest.com (which is apparently a thing), it does because of brief conversations between Claire (Bryce Dallas Howard) and her sister, Karen, as well as between Claire and fellow park employee Vivian.

Squeaking under the wire, “Jurassic World” is a good demonstration of how basic the Bechdel Test is intended to be. These women may have snippets of conversation together, but these scenes don’t show women as fully rounded characters.

At least “Jurassic World” is a handy example of how little filmmakers could do to technically be in the clear—if they bothered. Remember how little a film needs to do to pass the Bechdel Test, and then compare it to the numbers. The movies that made it over this extremely low hurdle fell in 2014, dropping from 67.5 percent to 55.4 percent year over year.

The real deal: I honestly wouldn’t have bothered to write about “Jurassic World” in this context if people hadn’t made such. A. Fuss. The Daily Beast called it “a big, dumb, sexist mess,” while Joss Whedon of “Buffy” renown tweeted about “wishing this clip wasn’t ’70s-era sexist. She’s a stiff, he’s a life-force — really? Still?” The New York Times dismissed Howard’s Claire as an “insulting” parody who “schemes and screams.” A USA TODAY opinion called it an “aggressively sexist blockbuster.”

These reviewers collectively took issue with protagonist Claire, the park director who starts as a prim, cold career woman archetype and reinvents herself during the course of the film.

Director Colin Trevorrow had an intriguing response to this line of criticism in an interview with the Los Angeles Times:

“All I could feel was, ‘Look, yes, it’s designed to be this way.’ I don’t feel that we need to surrender a woman’s femininity in order for her to be a badass action hero. That was something I was interested in. I feel like I’ve seen a lot of women who are made to look very masculine and tough — and that’s awesome too. But this felt like someplace I could go that might actually be new in how retro it is (emphasis added). So we embraced it.”

So is “Jurassic World” a box office juggernaut throwing its sexist weight around? Or is it subversively feminist by highlighting an aspect of femininity that hasn’t gotten as much screen time lately?

As usual, the answer is somewhere between two extremes. No, “Jurassic World” is not a horribly sexist film that will scar your daughter’s psyche, nor is it especially feminist. For the most part, Claire is a trope along the lines of the Strong Female Character. But Pratt’s Owen isn’t any more defined—“tough guy with a heart of gold” is just as much of a trope, while Claire’s two young nephews are (unfortunately) pretty normal onscreen fare: kids struggling to survive their parents’ divorce.

Slate’s Gabrielle Moss summed it up well when she called the film “goofy popcorn cinema.” No, it won’t hold up to over-analysis and it was never intended to. Moss admits this and instead zeros in on a unique detail: Claire’s champagne-colored stilettos. At first part of Claire’s stylish, perfected wardrobe as the park director, the shoes are a feminine symbol that Claire keeps with her throughout her character transformation. The delicate yet tough footwear choice—something Howard reportedly insisted on wearing—carries her during her journey of trying to survive an island of unconfined dinosaurs and rediscovering herself.

Howard’s Claire does go through a transformation—one that allows her to simply become a slightly better version of herself, rather than undergo some kind of generic badassification process where she suits up in combat boots and a flack jacket and reveals that she knew judo the whole time. In the end, the heels aren’t a symbol of the values that made Claire weak; they’re a symbol that she isn’t going to have to change every single classically “feminine” thing about herself in order to be redeemed.

Shoes, femininity and redemption. Maybe “Jurassic World” was pretty feminist after all.