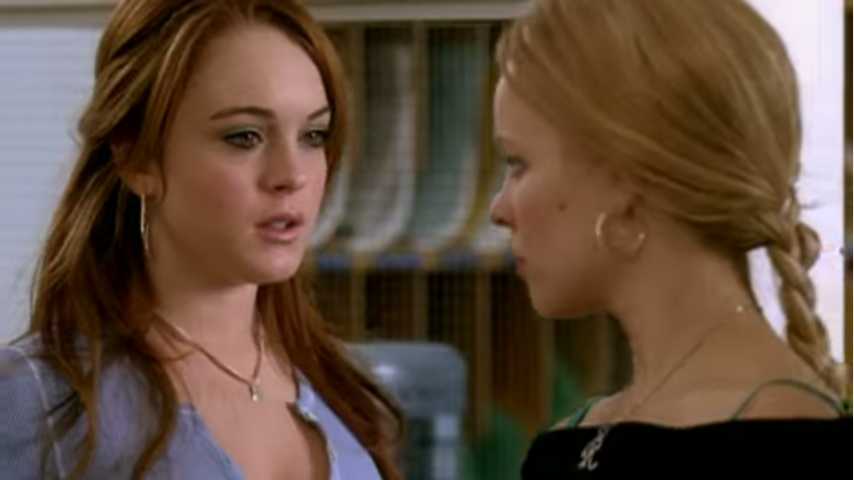 The film: On the off chance that this is literally your first time ever going on the Internet, “Mean Girls” is a Tina Fey creation that hilariously and delightfully explores the hierarchy of popularity that governs high school girls. Somewhere between a mainstream hit and a cult classic (or possibly both), “Mean Girls” is the quintessential Internet meme. It’s been intersected with the worlds of Panem and Hogwarts. The White House has tweeted about it. As noted by The Atlantic, “the limit to ‘Mean Girls’ does not exist.” It’s my generation’s “Heathers” minus the Drano and plus the power of Facebook shares.

Yes, I wrote about “Mean Girls” this week in honor of Mean Girls Day.

The conversation: “Mean Girls” passes the Bechdel test, hands down. Taking the audience into “Girl World,” the film leans on tropes (Lindsay Lohan’s wide-eyed new girl, Rachel McAdams’ blonde queen bee) but also takes the time to flesh them out.

The real deal: “Mean Girls” is another example of how Hollywood can make bank by gearing a film toward women. Filmed with a production budget of $17 million, “Mean Girls” has enjoyed an $86 million lifetime domestic haul and a worldwide box office of $129 million. It’s worthwhile to note that 2004 was a big year for McAdams as well as for films made specifically for women—“The Notebook” was released the same year, working off a production budget of $29 million to make $115 million worldwide.

“Mean Girls” struck a chord because we recognized ourselves in it. The Atlantic terms its unique combination of realism and SNL-esque hyperbole “socio-satire,” pointing out that its Illinois high school is remarkable only because it could be your high school.

As a result, while the characters of Mean Girls are richly sculpted—that is another aspect of the film’s genius—the universe it creates is sufficiently broad to lend itself to projection and metaphor. The film has a Joseph Campbell-like sensibility to it, with character types and story lines that are almost, aaaaalmost, universal. Almost, you could say, mythic.

It’s only a 30-second or so clip, but the mirror scene is one of the most revealing moments in the film, hiding its poignancy under flippant dialogue. Cady’s realization gets me every time.

In 30 seconds, “Mean Girls” encapsulates how girls are trained to view themselves: as physically flawed and segmented into various pieces that are “wrong” for one reason or another. Thighs, pores, nail beds, a hairline—any part of a girl’s physical appearance can contribute to her insecurity. And when Regina, Gretchen and Karen look expectantly at Cady, the message is clear: Find something that’s wrong with you or you won’t fit in.

A society that constantly feeds young women messaging on how to change their bodies to better fit an (impossible) ideal creates a world where girls criticize themselves and their bodies in order to bond. Women quickly learn to deflect a compliment with self-criticism—is it any wonder when they’re taught that confidence is divisive, that other women are their competition, and that to be barely good enough they should obsess over their appearance literally down to their pores?

The heroine of “Mean Girls,” Lohan’s Cady (pronounced like “Katie”) narrates the story and lives out a redemptive arc that sees her go from “homeschooled jungle freak to shiny Plastic to most hated person in the world to actual human being.” Similar to Cher’s “soul makeover” in “Clueless,” Cady realizes she doesn’t like who she’s becoming and makes active, concrete changes to be better.

Cady enters the scene as a naïve newcomer, wearing simple clothing and minimal makeup. During her days as a Plastic, she undergoes a makeover involving miniskirts and plenty of lip gloss, but by the end of the film, she is herself again.

It’s key to note that the movie’s romance is a side attraction, never as important as the scenes emphasizing the women. That particular storyline only serves to emphasize how important it is for Cady to be herself; it’s a mistake when she dumbs herself down to try to win the guy. Dreamy classmate Aaron Samuels likes Cady for her smart, funny, kinda dorky self—she’s never further away from getting the guy than when she loses herself in being a Plastic. Similarly, Regina goes through a make-under where her outer trappings of popularity are stripped away. She becomes more nuanced and sympathetic when we see her fall.

Another arguably feminist theme is articulated by Fey herself: “You all have got to stop calling each other sluts and whores. It just makes it OK for guys to call you sluts and whores.” Some self-named feminists might disagree with me, saying that Fey’s rhetoric blames women for something men do. But I think there’s space in a feminist discussion for both acknowledging that women suffer from harmful socialization and reminding them to take personal responsibility. We may be taught to tear down other women, but that hierarchy only works if we perpetuate it.

And that’s the point of the film. The title might be “Mean Girls,” but this movie is all about ending the idea that we have to hate other women.