The Problem with ‘Grace & Frankie’

By J.D. ECARMA
Netflix’s “Grace & Frankie” is a breath of fresh air in many ways.

The title roles are played by Jane Fonda and Lily Tomlin, reuniting decades after “9 to 5,” the premise being that two women in their retirement think they have their lives figured out until their husbands declare that they are gay—and in love with each other. The show’s brilliant writing approaches this premise to explore not only gay relationships but also traditional marriage in a nuanced way.

It’s a sitcom that is genuinely, delightfully laugh-out-loud funny. It tells a unique story about a real family, something that stands out in today’s dark TV scene comprising superheroes, vampires, zombies and for something different, handmaids in a dystopian future. But most of all, “Grace & Frankie” simultaneously gives air time (well, streaming time) to three long-neglected demographics: women, gay people and senior citizens.

Even though they are roughly half the population, women have long had to fight for TV roles where they are not wives or daughters in the supporting cast or fantasy creatures (see “Bewitched” and “I Dream of Jeannie”), but real women who are the center of the story.

If women had to stick to a particular script to make it onscreen, gay people were never given lines at all. While homoerotic undertones are a tale as old as time (and present in film much earlier than 2017’s “Beauty and the Beast”) actors who were later revealed to be gay or bisexual in real life were never seen onscreen openly as anything but straight. 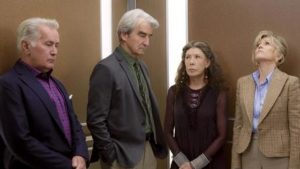 But despite all of this representation, there’s one under-served demographic that is essentially ignored in the world of “Grace & Frankie”: those with a nuanced perspective on gay marriage.

“Grace & Frankie” only depicts two perspectives on being gay: Either gay relationships are completely acceptable and should be glorified, or gay people should be dehumanized, mocked, protested and treated with scorn. The two extremes don’t leave room for the gay person who is celibate because of their religion; the Christian florist who has sold flowers to gay customers for years but can’t provide her services to a gay wedding because of her beliefs on marriage; or the church who accepts gay employees but has to fire them if they decide to get married and (as the church views it) openly live in sin.

In one episode, Robert tells his very elderly mother that he’s gay. She is a bitter old woman who only knows how to respond with anger to the people in her life, and she reacts with complete vitriol to Robert’s news. In contrast to the show’s wonderfully human characters, she comes across like a cartoon. Robert later fears that as his mother says, he will go to hell for being gay. She almost literally haunts him, a gaunt, angry figure that he temporarily can’t get out of his mind.

Another anti-gay character depicted on the show is a bigoted protester who shows up at a play to protest Robert and the other gay actors for a season 3 storyline arc. He, too, is a character completely without nuance.

Robert references Chick-fil-A as an example of bigotry, saying that he boycotts their “delicious” chicken biscuits. The restaurant chain that is famously closed on Sundays became a cultural flashpoint in 2012 when CEO Dan Cathy talked in an interview about his personal opposition to gay marriage because of his Christian faith. Conservatives flocked to the chicken chain in support, while liberals wondered if they were allowed to enjoy its sandwiches. Years later, protesters showed up at the first Chick-fil-A location in New York City. 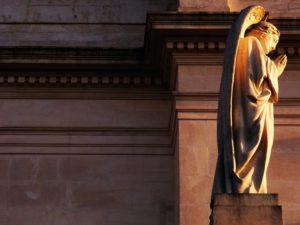 Probably the closest that “Grace & Frankie” gets to depicting someone who is kind and tolerant while unable to say that a man and another man have as valid a relationship as a husband and wife is when Robert and Sol want to be married and a Roman Catholic priest is asked to perform the ceremony. In the brief scene, the priest politely declines to marry them, and that’s the end of the matter.

“Grace & Frankie” doesn’t acknowledge the in-betweens, those who are accepting of gay people or are perhaps gay themselves while being unable to support gay marriage. Eve Tushnet, a self-described gay Catholic, is one example, someone who has written about the challenges of being a lesbian and accepting that she must live a celibate life to be in keeping with her faith. Nor does it acknowledge people like conservative commentator Guy Benson, who is gay and supports gay marriage while also valuing religious freedom.

“I’m for civil marriage, I’m for nondiscrimination laws — but I think there should be broad carve-outs for religious organizations, in particular, and narrow carve-outs for closely held businesses that serve the wedding industry,” he told BuzzFeed in a 2015 interview.

I don’t expect or require a Netflix show to include every view on gay marriage for me to be able to enjoy it. But in a culture that continually misunderstands and misrepresents a particular group of people, it would have been incredibly refreshing to see something as unique as “Grace & Frankie” break the mold.