Yes, a Carly Fiorina vs. Hillary Clinton Showdown Is This Conservative Feminist’s Dream 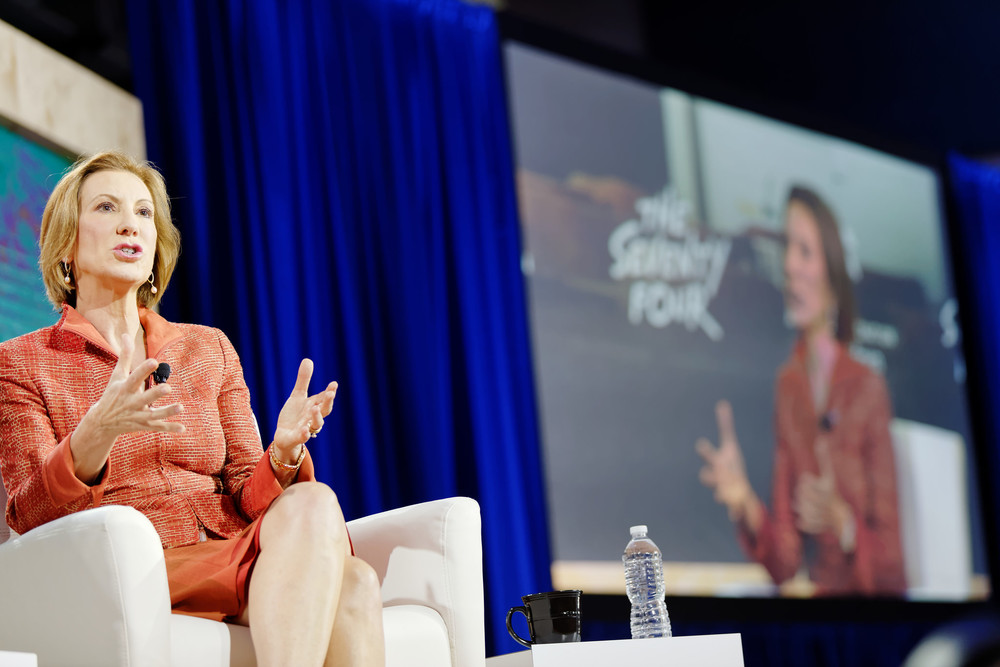 “I may not be your dream candidate just yet, but I can assure you I am Hillary Clinton’s worst nightmare, and in your heart of hearts, you cannot wait to see a debate between Hillary Clinton and Carly Fiorina.”

Carly Fiorina’s closing statement at this week’s GOP debate made me smile.

It also made me wonder why liberal feminists can barely let themselves celebrate a woman candidate because she doesn’t believe the right things when I think it’s kind of awesome that we have two such different women in the running. Hillary Clinton and I would agree on basically nothing, her pant suits and Twitter style included. But do I admire her for attempting to break through the glass ceiling to the presidency? Absolutely.

Fiorina and Clinton can both carry a debate stage and would be well-matched opponents. But let’s take a look at why of the two, Fiorina is the real feminist.

Kind of like her switch to supporting gay marriage, Clinton only embraced feminism when it became politically advantageous for her to do so. She’s given a wide-eyed declaration of feminism to Lena Dunham (guess what, ladies, feminism doesn’t mean you hate men!), called out her biggest Democratic opponent on supposed sexism and basically said America should vote for her because she has a vagina.

On the other hand, Fiorina subtly exposed Donald Trump when he attacked her appearance, using a real moment to connect to the American women who likely relate to her experience—acknowledging sexism without having to cry wolf. As detailed by Christina Hoff Sommers and Christine Rosen in Politico, Fiorina ushers in a “postfeminist” era that offers “a model of female power that is free of the whining and pandering that has for so long plagued modern feminism.”

Fiorina practices what she preaches.

Fiorina can’t help but stand out because of her gender, but she also sticks out like a sore thumb (in the best way) in a party that has too long ignored and marginalized women.

“Women are not simply 50% of our population or our workforce—they are 50% of our potential,” she said in an April Facebook post calling for equal pay for equal work, a common rallying cry for feminists of all stripes.

Fiorina’s method to close the gender pay gap is merit-based: hiring the best person available for the job regardless of other factors, such as seniority. Most of her top staffers happen to be women, making the median female annual salary on her campaign about $15,000 higher than the equivalent for men on her campaign.

For all her talk about equal pay, Clinton paid women 72 cents on the dollar in her Senate office, while female staffers on her campaign have a projected annual salary of $7,000 less than the men, the Free Beacon reported in August.

The liberal feminist line is that a conservative woman (especially one who is pro-life) simply does not count because she has “anti-woman” views. This closed-off view of how women should think and behave seems like the opposite of feminism to me.

“I would also add, it’s not enough to be a woman,” Clinton said of Republican Sen. Joni Ernst while campaigning on behalf of Ernst’s male opponent in Iowa. “You have to be committed to expand rights and opportunities for all women.”

Ernst later turned the tables with a stellar quote about real “women’s issues.”

Referencing Hillary Clinton’s presidential run, Ernst said, “You have to care about women’s issues. And women’s issues here in Iowa are that we have a strong economy; we have jobs that our sons and daughters can go off to someday; we have a great educational system. And women want strong national defense. We want to know that our families are going to be safe.”

Fiorina has similarly detailed what women want, defining feminism as “a woman who lives the life she chooses. … A woman may choose to have five children and home-school them. She may choose to become a CEO, or run for president.”

Strength, choices and power for women. Isn’t that feminism in a nutshell?