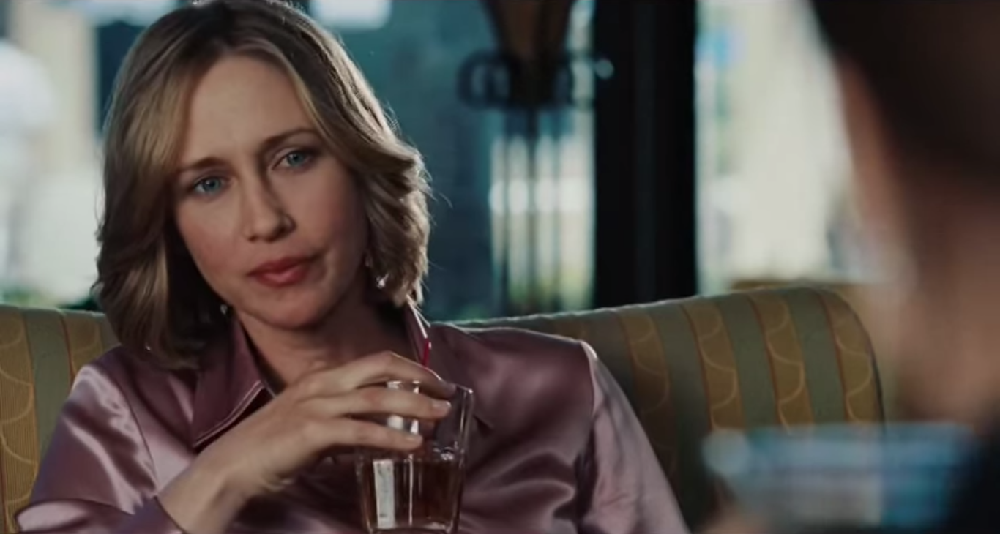 The film: “Up in the Air” was one of the good things that came out of America’s economic downturn. George Clooney is Ryan Bingham, the guy whose job involves telling you that your job is no longer available. With companies downsizing all over the country, he’s on the road 322 days a year. “Up in the Air” is cynical enough to be realistic while managing to turn heartwarming at exactly the right moments.

The conversation: Whether or not “Up in the Air” passes the Bechdel test is up for debate. Natalie Keener (Anna Kendrick) has a conversation where she fires another female character named in the scene (although not in the credits). BechdelTest.com doesn’t give it a pass, although noting that “female characters actually outnumber the male characters in this movie,” but users have since disagreed with the rating.

My question would be whether or not the scene counts since even though Kendrick is important, Clooney’s character is still very much present, not letting the moment totally focus on the two women.

The real deal: “Up in the Air” may center on Ryan and his foray into feeling things like a real human, but its plot is driven by the fascinating female characters who make him question his meticulously planned, emotion-free existence. It ultimately doesn’t matter whether or not “Up in the Air” passes the Bechdel test because this is a subtly, gloriously feminist film.

Let’s look first at Natalie, a role that director Jason Reitman has said he wrote specifically with Kendrick in mind.

“She oddly talks like someone from the 1940s, and she’s so witty and smart and sharp, and I needed a girl who could go toe-to-toe with George Clooney, and she was the one,” Reitman described to MTV News in a 2009 interview.

Natalie starts out straitlaced, driven, focused. She sounds as if she’s murdering her keyboard when she types. She has a Life Plan that is (spoiler alert) thrown off kilter when her boyfriend breaks up with her over text message.

Kendrick is a joy to watch in the role—even at her most robotic while creating a flow chart to fire people, she remains empathetic and interesting. Her temporary disintegration after the breakup comes across as a character moment rather than a contradiction or undoing of who she was before. Here is Natalie when she’s falling apart. But at her core, she is resilient.

It’s refreshing to see a storyline involving an older man in a mentor role with a young woman that has no hint of or need for romance. Clooney and Kendrick have plenty of friction and chemistry onscreen without it.

The actual romance in the film is arguably where “Up in the Air” shows its most startlingly feminist colors. (Note: Spoilers ahead.)

When Ryan begins having casual encounters with Alex (played by a worldly wise, coolly gorgeous Vera Farmiga), he assumes he holds the power in the relationship. Everything society teaches, every movie storyline, every trope tell us that women want love instead of just sex.

As this Sundance TV blog details, the film’s climax only works because of how we view women.

“The gut-wrenching twist happens because Ryan—and viewers—don’t believe Alex capable of deceit due to her gender. Not that marital cheating is a feminist value. This movie simply forces us to face our acceptance of widespread stereotypes: men want sex and women want love; men cheat, women don’t.”

Ryan assumed he could have a happy ending if he changed his mind; he is stunned because Alex gave him exactly what he asked for—completely strings-free sex that had no long-term or emotional meaning for her. The audience is shocked because we don’t expect that mindset of women. Only men are supposed to be that way.

In one of the film’s key conversations, Alex and Natalie discuss men and relationships, expressing what some would call retrograde ideas. Alex says that being with a man who doesn’t make more money than she does would be a “recipe for disaster,” while Natalie offers the caveat that “I don’t want to say anything that’s anti-feminist” before bemoaning how she feels career and success won’t matter “until I find the right guy.”

These are questions nearly all women—whether or not they choose to take on the feminist label—tend to struggle with, so I wouldn’t discount “Up in the Air” for giving them screen time. The important thing to take away is that ultimately, the women of “Up in the Air” are not only the story’s catalysts, but are also in a sense, its victors. They are both in charge of their destinies. It’s Clooney’s existentially challenged Ryan who still needs to figure it out.