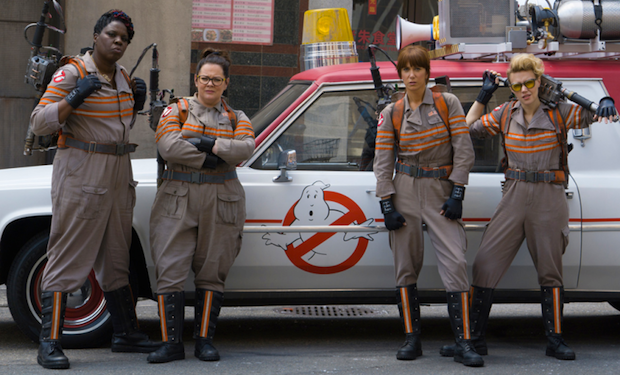 For someone who really cares about women in movies, I wasn’t especially excited about the prospect of an all-female “Ghostbusters” reboot.

Don’t get me wrong: I love seeing a diverse cast of women in any movie, and I think the “Ghostbusters” universe is a fun, expansive one that has the potential to lend itself gracefully to remakes, sequels, etc. But I don’t think taking an all-male franchise and making it female is an especially feminist move.

Why? Because I know women are inherently interesting and can be interesting onscreen in unique, original stories. A “Ghostbusters” update isn’t feminist the way 2011’s “The Help” was feminist—or “Steel Magnolias” in 1989. Both films are all about women, giving us onscreen stories that are poignant, funny, heartbreaking and beautiful. These are not Strong Female Characters; they are real women with complex personalities and believable stories.

I have to say that i09 had my favorite take on the “Ghostbusters” reboot:

This is not some special girl-themed version of Ghostbusters where the fact that our characters are women matters. It’s not a chick flick. It’s just straight-up the new Ghostbusters movie, about lovable, entrepreneurial mad scientists with giant, bizarre energy weapons, a pimped-out jalopy, and a burning desire to rid the world of evil spirits. Only this time the actors happen to be female. There’s no reason they couldn’t be guys. Likewise, there’s no reason the first crew of ghostbusting weirdos had to be guys. They just had to be dorks, and be funny.

So maybe I’m down for a “Ghostbusters” crew that happens to be made up of women. But here’s a reminder that Hollywood hardly deserves feminist props just yet:

Movies aren’t realistic when it comes to women

Movies still don’t seem to be aware that women make up slightly more than half of the population. Only 31 percent of speaking roles in movies are played by women and less than 23 percent of films feature a female protagonist, according to this Geena Davis Institute study.

The “Gender Bias without Borders” report examined movies in 10 territories with ratings “roughly equivalent” to G, PG or PG-13, as well as films in the U.S. Altogether, 5,799 named or speaking characters were analyzed.

Women are also far more frequently sexualized onscreen, being five times more likely to receive comments about their appearance and twice as often shown in revealing clothing or nude compared with men, the study found.

Here’s how Hollywood can get it together

George Clooney had a sound suggestion for Hollywood in a recent interview, pointing out that plenty of roles can be reworked for women—before they go onscreen.

“There’s a lot more [roles] out there if people just started thinking,” he said in reference to an upcoming Sandra Bullock role originally written for a man, as quoted by Entertainment Weekly.

Bullock took on the leading role in “Our Brand in Crisis,” playing a political strategist in the film that Clooney helped produce. Similarly, Julia Roberts played the lead in the upcoming thriller “Secret in Their Eyes,” another role originally written with a man in mind.

“I could see that she was intrigued by the prospect of this part, even though it was still written for a man. Julia had ideas about how she would want the role tailored to be a woman,” director Billy Ray told Entertainment Weekly.

And here is the shift we truly need when it comes to movies: An end to the assumption that the leading “man” in a film has to be a man. Let’s have less of the top-down approach of reworking old franchises for women and more original stories organically developed to fit women.

So, Hollywood: The next time you have a film in development about a lawyer/spy/president/superhero, just remember … the lead doesn’t necessarily have to be played by a dude.