Beyond the Bechdel Test: ‘The Intern’ 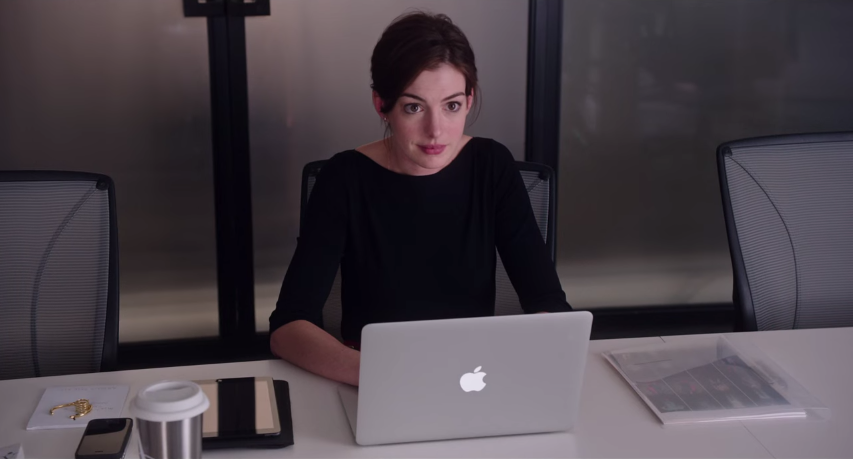 The film: “Pleasant” is probably the nicest way to describe “The Intern,” a mechanically charming movie about a senior intern program that places Robert De Niro’s 70-year-old retiree in Anne Hathaway’s hip, young e-commerce startup. “Feel-good” should be slapped across its poster in enormous letters. It’s the sort of movie where sentimental piano music starts playing whenever the scene is meant to be touching.

The conversation: “The Intern” easily passes the Bechdel test. Hathaway’s character has multiple rapid-fire exchanges with her female assistant about products, customers, site maintenance, all the moving pieces that make up her company, About the Fit. She also spends time with her daughter, Paige, and has conversations with other moms at Paige’s school.

The real deal: Hathaway plays Jules Ostin, an entrepreneur working to break the glass ceiling of the tech world with the shopping site she founded. While a bit sanitized, “The Intern” offers a look at startup culture and the power one person’s idea can have in the Internet age. Jules’ site tells customers exactly how clothing will fit them, eliminating the regret every online shopper has experienced. The film enters at the point where Jules’ idea has grown into a 200-employee company—funded by VCs who are constantly pushing About the Fit to appoint a more experienced CEO.

To keep her creation running smoothly when the company has expanded so rapidly, Hathaway’s Jules is a bit of a slave driver. She rides a bike around the office because it’s faster than walking and she hates to waste time. She can’t stand it when people talk too slowly, and her employees are a little scared of her. She’s Jeff Bezos in an oversized cream-colored sweater paired perfectly with a black ballerina skirt. And she’s not eager to hand over her beloved company to anyone—especially someone who dismisses her vision as a “chick site.”

But don’t get your hopes up that this is a film about a neurotic founder and CEO whose quirks are the heart of the company and who happens to be a woman. Unfortunately, “The Intern” is more an exercise in Fascinating Films That Could Have Been than anything else. Despite the rainbow of possibilities in its premise, the film mostly focuses on Jules’ struggles with work-life balance as she tries to be both a wife and mother and a powerful player in the world of e-commerce.

Instead of fully exploring sexism in the industry, Jules’ struggles as a woman in the tech world attempting to build her own business are boiled down to a few lines. “The Intern” shows us that Jules has drive, but it never develops the character further. I wanted her backstory. I wanted to know why this idea was so important to her beyond “I could make money this way.”

Jules references Mark Zuckerberg and how he maintained control of Facebook even though he was too young for investors to initially trust him to run a company. Here’s a film opportunity missed: Hathaway being savvy and ruthless as she ensures that nobody else takes her company out from under her.

Instead, Hathaway gets to be constantly fragile—arguably, the opposite of the Strong Female Character. Jules is not strong. If anything, she’s too human and too vulnerable. Do we really need to see her cry multiple times during the film? And throw up because she can’t hold her liquor and worry about (spoiler alert) her cheating husband and be horribly anxious before business meetings and have a breakdown because she accidentally sent an angry email to the wrong person?

Let’s put it this way: The guys in “The Social Network” didn’t do a whole lot of crying. When “The Intern” treads such familiar ground, it diverges into what has been branded the “princess effect”—the need to explain powerful women lest they be too intimidating and therefore unfeminine. So yes, Jules had a brilliant idea that she worked hard to bring to fruition and she’s incredibly dedicated to her company. But she also exudes fragility at every turn of the script; “The Intern” reminds you in nearly every scene that Jules is a woman through the most cliché ways possible.

When it comes to character-defining moments, her struggles as a working mom trump everything else. Why didn’t we get to see Jules ask a potential CEO tough questions? Why wasn’t the idea that De Niro’s character’s decades of business experience could inform Jules’ scrappy, youthful startup explored further? And where, where is the scene where Jules convinces a boardroom of skeptical investors that she can run her own company?

“The Intern” could have gone a hundred more interesting directions. Instead, it settled for being the umpteenth iteration of “ugh, it’s just so hard for women to have it all.”