Mizzou, Free Speech and Why the ‘Youths Being Youths’ Argument Isn’t Helping 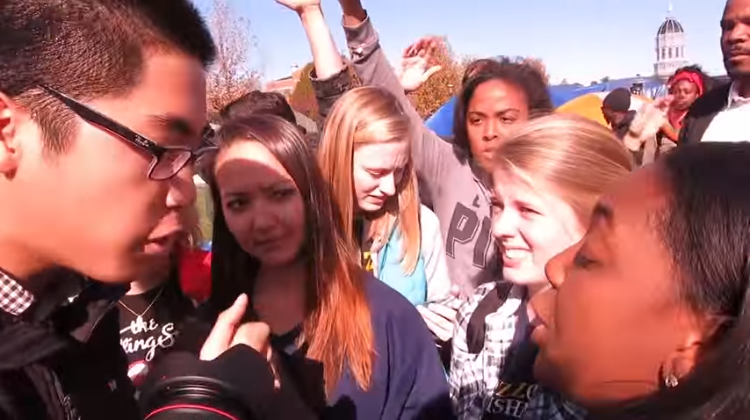 Writing in progressive sanctum Salon, Amanda Marcotte offered a doozy of a piece this week chastising those of us (and Jonathan Chait!) who collectively recoiled from some of the recent events at the University of Missouri.

In her piece, hilariously titled, “Quit with the ‘PC’ hysteria: College kids are not trying to steal your freedom of speech,” Marcotte seems to sum up her defense of protesters physically blocking a photographer thusly: They’re just youths being youths! So by Marcotte’s reasoning, we’re supposed to a) applaud the protestors for being adult enough to stand up to “authority figures” and “demand a voice,” but also b) excuse ridiculous behavior because you know, they’re just “young people, drunk on their first engagement in politics.”

It gets worse. “[T]he real story here,” writes Marcotte, “is how young people today are living in stressful, often unmanageable situations. No wonder some of them don’t act perfectly all the time.” Oh really.

The specific episode at Mizzou that caused most of us to recoil—a reaction Marcotte has ridiculed as “hysteria”—was captured in a video showing student photographer Tim Tai being harassed for trying to photograph the protesters. In the video, Tai can be seen trying to peacefully take photos, when he is surrounded by a mob of students and teachers chanting and physically blocking him from doing his job.

At the end of the video, an adult later identified as assistant professor of mass media Melissa Click, is seen bullying a different student journalist. At one point she even yells, “Hey, who wants to help me get this reporter out of here … I need some muscle over here!”

It should hardly need explaining to someone like Marcotte—who I’m sure considers herself a journalist—that for a photographer, pictures are their form of speech. Not allowing them to get to the point of being able to freely capture something on camera is, by definition, a violation of their right to exercise that free speech. Same thing goes for a journalist who has the right to cover public events on public property, without fear of physical harm.

Again, why does any of this need explaining?

Oh yeah, because in Marcotte’s world, those of us silly enough to care about free speech in the real world as opposed to some abstract idea just need to “calm the hell down.” After all, she writes, “No writer is actually being barred from expressing an opinion about the protest.” True, but heaven forbid a journalist be able to cover events by having actually been present, as opposed to opining on things half a country away in the natural habitat we call Brooklyn.

No one is arguing that protesters or college students—or anyone for that matter—have a duty to speak to reporters. But that also wasn’t the issue, although it was some clever misdirection by Marcotte. Don’t want to talk to a reporter? Fine. But that doesn’t mean you can physically punt him from public space. Or physically block and intimidate a photographer.

But that wouldn’t bode well for Marcotte’s overall argument, which seems to be “free speech, schmee speech. Let’s just all give these kids a break.” And maybe we would, if adults like Marcotte and Click—who’ve had a little more practice adult-ing—didn’t step in to coddle and placate mobs on college campuses with “there there’s” and “I feel your pain’s” at every opportunity.

College students are adults. Young adults, but adults all the same. They’re not children who need “safe spaces,” and treating them like they are actually does a disservice to their cause. They can’t be adults stepping up and “demanding a voice” and kids who need to be coddled at the same time. As for the violation of free speech, well, that’s a life lesson even kids should be able to grasp.

Amanda Elliott works in digital media but finds a higher calling in making sure that not every “feminist” corner of the Internet belongs to Lena Dunham. A proud southerner, she now lives in the D.C. suburban enclave of Arlington, VA. She strings more words together (sometimes coherently) at @AmandaCarey1.