Heavy Lifting Is Easier Than You Think 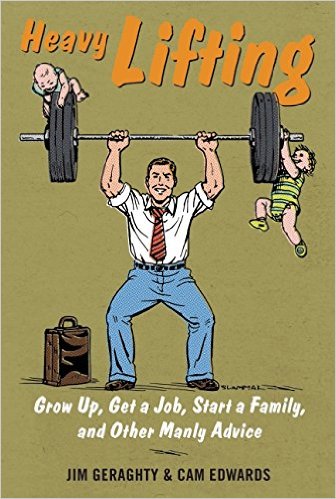 There is no lack of advice for guys, especially millennial guys, on how to be a guy. There is also no lack of voices out there calling for young men to grow up. A millennial guy hears the term “man child” so frequently, I’m surprised there hasn’t been an “own the insult” movement around it with dudes out there proudly proclaiming their man-childness to the disapproval of all the right people.

It is to this end that Heavy Lifting, the book by Jim Geraghty and Cam Edwards on manly advice, seems mis-marketed. From the first chapter “Ward Cleaver Was a Stud,” I was expecting something along the lines of the standard litany on the failings of “guys these days” along with the standard exhortations to just grow up. In which case, yawn, no thanks, I’ve heard that story before.

But the celebratory tone of this book is what really separates it from the rest of the scoldings that young guys are used to getting. In fact, I almost wish I could change the subtitle from “Grow Up, Get a Job, Start a Family, and Other Manly Advice” to something that might be more at home on the “How To” shelf. In this book, Geraghty and Edwards spend only a little time diagnosing the problem of guys who aren’t aligning with the view of how a man grows up. Instead, the book is filled with the stories and struggles of two guys who did grow up and found out that it is a lot more fun than you might realize. Think of it as a “playbook” with great “moves” for life.

That’s why I want guys to pick up this book, ignore the subtitle exhortations and treat it like a list of fun things to try. Protip: There are a lot of women who would happily go for a guy who’s willing to try these “moves.”

With that in mind, here are seven tips for millennial guys who aren’t afraid to do some heavy lifting … complete with Barney Stinson GIFs because you might as well do a playbook right.

1. Get your own place

Women like guys who aren’t afraid to strike out on their own. Step one in that process is getting the hell out of your parents’ house:

Sure, you can get a job, but careers are built slowly. Putting in the work takes time, but don’t think no one is noticing. Make friends at your job, even the people you might not immediately get along with.

Ask her out. Like … on a date. Give it a try. Call it a “social experiment” if you must.

5. Scale back on the video games

I’m actually a little separated from Jim and Cam on this one. I still play games, but with far more moderation than I once did. I had an experience similar to Cam’s:

Living together isn’t getting married. Show her that she isn’t just “fun to be around” but actually worth the commitment. It’s not as hard as you think.

The dad parts of the book are the most fun because the authors spend a lot of time talking not only about the responsibilities of being a dad, but also the childlike fun that comes with it.

We spend a lot of time trying to be giants, be respected and adored, in our personal and professional lives. Kids will give that to their dads almost by default.

So to guys who haven’t done any of these “moves” yet, maybe it’s time start some heavy lifting of your own. You will find it more fun than you realized.