Lessons from Living on a Food Stamp Diet

Late last year, I found myself unemployed. This wasn’t incredibly unexpected, but it wasn’t particularly fun either. As I looked for new jobs, I had to trim the fat from the family budget, so I decided to try to live off the average food stamp budget for six weeks.

You might have heard of this from the frequent “SNAP Challenge” events in which people try to eat on a food stamp benefit for one week. People tend to argue about what really constitutes a true food stamp benefit, but a widely accepted target is $34 for a week.

I’ve always hated these challenges because they feel like turning the need of millions of Americans into a game, making the needs of the poor nothing more than another opportunity to proclaim our alignment with our preferred social group.

This game typically goes one of two ways:

You can’t live off $34! We need to increase the SNAP benefit!

This is also known as the Gwyneth Paltrow method.

This is what $29 gets you at the grocery store—what families on SNAP (i.e. food stamps) have to live on for a week. pic.twitter.com/OZMPA3nxij

This stance typically involves some combination of poor planning, complaining, and arguing that the only possible solution is for Congress to get off their lazy butts and increase the food stamp benefit. The assumption here is that if food stamp recipients can only go hungry for a couple more years (and only then if we get enough people voting the right way) then things will be fine. They get that little dopamine high from being such incredibly good people and speaking truth to power … or at least speaking truth to the people who still pay attention to them on Facebook.

This position frequently comes along with some statements about teaching a man to fish. Bonus points for the words “self-sufficiency,” “bootstraps,” “church,” or “get a job.” Some of these posts are smug and dismissive, utterly lacking in compassion for anyone who has to rely on government assistance for basic life needs. And those are usually the nice ones.

What doesn’t happen is people trying to help those who actually have to live off this kind of food budget. It’s 100 percent in-group social signaling and 0 percent trying to understand “how do people live like this and can I help them?”

So I spent six weeks spending $34 a week on food. I wrote down each item purchased, every meal, every recipe, and wrote it all out. 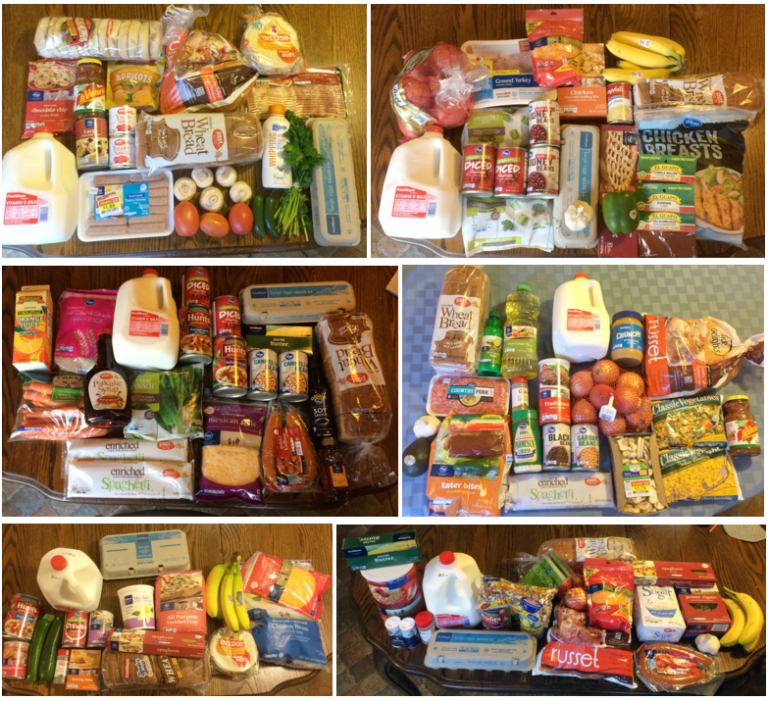 These are the most important things you need to know if you’re trying to live on a bare-bones $34 a week diet: 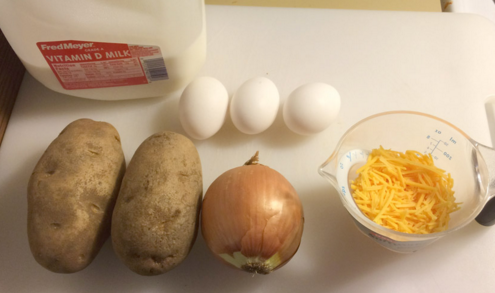 How many things can you make with eggs, potatoes, onions, cheese and milk? More than you want.

Almost every single week I bought milk, eggs, cheese, bread, potatoes, onions and pasta. Sometimes I’d have enough left over from the week before, but I had to always have some on hand.

If I could afford it, I’d buy extra cheese or extra eggs so I’d have enough to last for two weeks. This would free up extra room in the budget for the next week. Making an extra $2 in a weekly budget opens up some really exciting possibilities.

The hardest part of all this was the planning. I had to plan every recipe and every meal for the next week before I could make my grocery trip. I kept my phone calculator open as I filled my cart because I had to know how much I was buying to see if I could afford 16 ounces of cheese instead of 8 or an extra box of pasta or maybe some spices.

Sometimes things would be on sale. That was the worst. I always wanted to stock up on things while they were on sale, but the fact of the matter is that there was almost no room in my budget to do that. So I might get a little more than I planned, but not enough to really take advantage of the sale.

The biggest treat is fresh vegetables 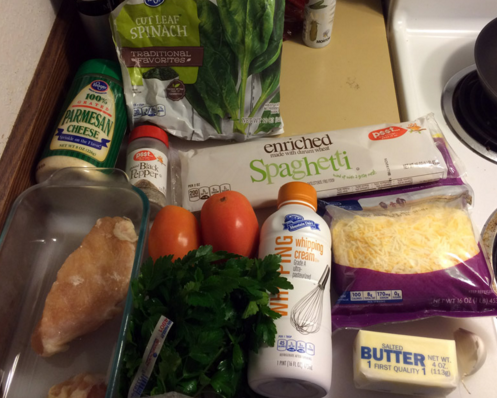 After five weeks of way too many potatoes, eggs, and onions, this was basically heaven.

Fresh veggies are so expensive, they always feel like a splurge. In week 2, I wanted to make one of my favorite dishes, a really delightful zucchini pasta that uses yogurt instead of sauce.

I had always just tossed the zucchini into my cart, never stopping to think about it. I normally use three or four zucchini and end up with more vegetables than pasta. But I could only afford two of them and they came to $2.59. This was hugely expensive … almost as much as a whole gallon of milk.

My “treats” were almost all fresh veggies. One week I got an avocado or carrots or maybe mushrooms on sale (eat them fast before they go bad). My best week was week 5, which was when I was able have enough leftover food from other weeks that I got tomatoes, jalapenos, olives and bacon.

It’s hard to describe how good it felt to have this seemingly small variety of fresh food after weeks of pasta, potatoes, eggs and toast.

Small price increases can be devastating

The first week I got unreasonably lucky. I needed butter for nearly every recipe and I was trying to get some kind of meat for protein. I managed to start on a week when butter was $1 off ($2.99) and a 14-ounce kielbasa was 50 cents cheaper than normal (down to $1.99).

These tiny price fluctuations can wreak havoc on careful planning when you’re counting dimes in your budget. Sometimes you start looking forward to a particular meal and have to make the hard choice to exclude one of the key ingredients because cheese is just too expensive this week. It’s psychologically brutal.

The ethnic aisle is your friend

This was the weirdest thing I discovered. For whatever strange reason, the Hispanic aisle had spices at much cheaper prices.

Many of my recipes called for black pepper, which was a jaw-dropping $4.99 for 4 ounces. That’s 15% of my weekly budget for a single spice. But as I was getting tortillas ($1.29 for 30) I saw that I could get just over half an ounce of black pepper for 99 cents. 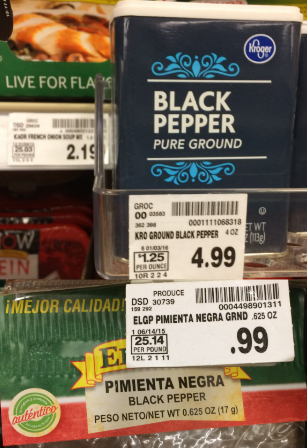 You may be saying “but that’s MORE expensive per ounce.” This is true, but it also points to the core of the struggle of living on a SNAP budget: Yes, you could buy 10 pounds of rice, but it’s hard to live on it. Eating the exact same three cheap things day in and day out isn’t just nutritionally fraught, it becomes revolting. Not eating anything actually feels better than yet another bowl of rice and beans. My goal with the snap challenge was to find recipes and shopping lists that make living on $34 a week something of a pleasure.

I hope it helps someone.