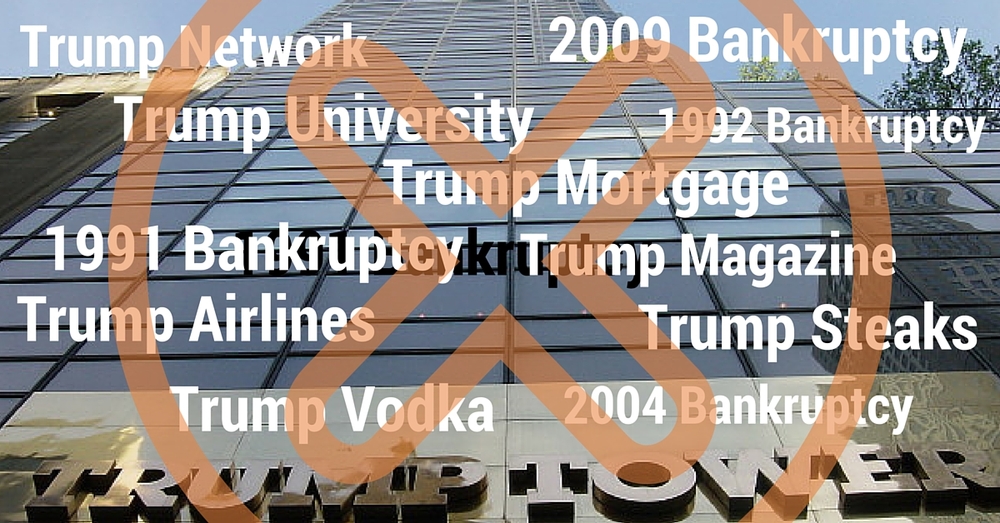 If you can overlook Donald Trump’s bigotry, anger and complete lack of political experience, you can support him based on his business expertise and plans to get the country back on track, right? He’s a fighter who will get us a good deal with China, Mexico and Russia … right?

Not unless bankruptcy, lawsuits and multiple failed companies sound like a good deal to you. Trump can try to pass off Bush Brothers steaks as his own and vow he has never been bankrupt all he wants, but he can’t change the inconvenient facts.

Here are a few of his failures:

First bankruptcy: Banks that had financed Trump’s real-estate investments bailed him out with $65 million in additional loans and credit. Nevertheless, nine months later, with Trump nearly $4 billion in debt, he filed for bankruptcy for his Taj Mahal casino.

Trump’s love of power and unabashed disregard for limited government should terrify Americans. So should his utter lack of solid policy ideas. His big plan to impose tariffs on Chinese imports has already been tested (and failed) under President Obama; his biggest supporters can’t explain how he’ll build that $10 billion wall and make Mexico pay for it; and even his stances on immigration issues can change multiple times in a single day.

He has almost certainly exaggerated his net worth, which he claims is $10 billion but is likely around half that. Reporters recently fact-checked 4.6 hours of Trump stump speech speeches and press conferences to discover more than five dozen misleading or completely false statements that would have required a correction in a story—essentially, Trump lies at a rate of one false statement every five minutes.