Rubio’s Answer on Immigration Made an Important Point: We Don’t Trust the Government

I’ve watched most of the presidential debates this primary season and one of the most fascinating answers to any question was the answer Marco Rubio gave when talking about immigration (start at 2:40).

Rubio touched on the most important problem for any new president: the fact that trust in the government is nearly completely gone. Rubio said the biggest thing he learned in trying to implement immigration reform is that it was impossible to find a place of compromise because people believe that the government will run with what they compromised on but not deliver on what they thought they were compromising to get.

The destruction of trust in the government is widespread and devastating. Some people like to think that this lack of trust is primarily a conservative feature, but recent polling indicates that it is ubiquitous … only 28 percent of Democrats and only 11 percent of Republicans trust the federal government. 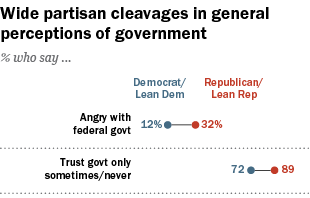 Looking at the government’s track record, it’s easy to see why this is the case.

Liberals saw (what they believed to be) massive Wall Street fraud and have been agitating for arrests on Wall Street for years. Instead they got fines valued at a tiny fraction of Wall Street profits, fines that could be easily viewed as a “cost of doing business.” They’ve been waiting for Guantanamo Bay to close. Many of them are very unhappy with the implementation of Obamacare, thinking they were getting something close to universal coverage but instead seeing their premiums and out-of-pocket fees rise.

Conservatives similarly have excellent reason not to trust the government. They watched as the IRS rejection of Tea Party organization applications went from conspiracy theory to established fact. They listened as Hillary promised a new era of diplomatic relationship with Russia (and then watched as the Obama Administration shredded Mitt Romney for suggesting Russia was a threat). They watched President Obama’s claim that Obamacare would allow people keep their plan and keep their doctor go from half-true (when he made it) to completely true (during the election in the form of calling Romney a liar when he suggested the opposite) to the lie of the year (after the election was over).

Part of the problem is that the most common form of punditry is for a pundit to to state clearly that he or she knows exactly what will happen in the future and then to never mention it again when they are wrong. This happens so frequently, people who watch politics casually view it as simply par for the course. Unfortunately a media whose job it is to help people sort out the details has become aggressively partisan, literally cheer-leading policies they are supposed to report on.

This is what the 2016 election is about: trust.

It’s not about refugees … it’s about trust.

It’s not about immigration; it’s about trust.

You can talk until you’re blue in the face about what a reasonable immigration policy might be and how we can change what we have, but no one trusts the federal government to competently execute that policy.

And it’s not about Trump either. It’s about trust.

It’s not that people trust Trump. I would argue that they don’t. But they don’t trust anyone. They don’t trust people who say bad things about Trump. A media that falsely reports that Ben Carson wants military drone strikes on our border, is a media that inoculates casual observers from the actually terrible things Trump says.

Rubio is right that step one is to re-establish trust with the American people. Unfortunately, I’m skeptical that we can do that in four years. Maybe not even in eight. Establishing trust takes a lot longer than destroying it.