Trump’s China Plan Has Already Been Tried … by President Obama 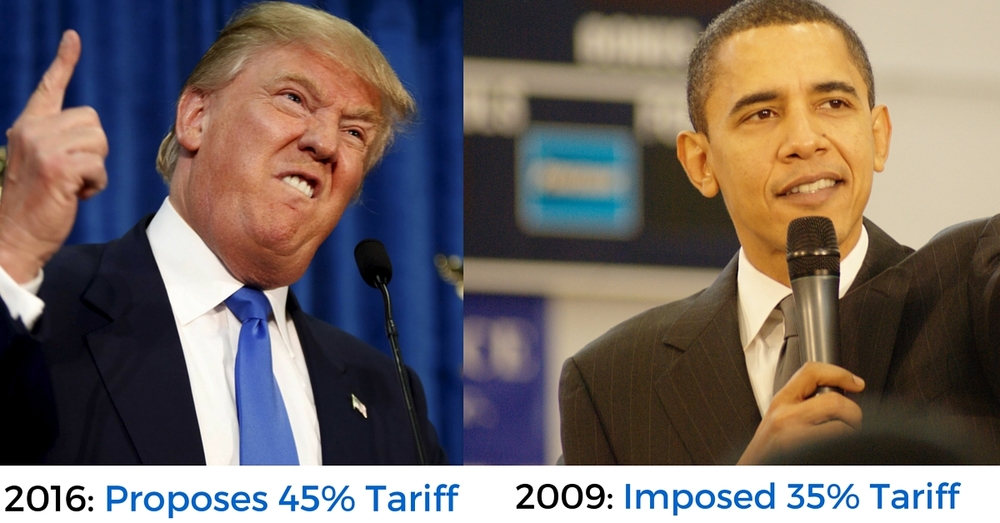 Donald Trump may have tapped into real problems faced by many Americans, but anyone who has struggled in President Obama’s economy should know better than to vote for him.

You see, Trump’s big plan to slap tariffs on China in a “good deal” has already been tested out … and it cost Americans more than $1.1 billion in added costs while saving just 1,200 jobs.

In 2009, President Obama approved increased tariffs on new Chinese car and light truck tire imports in an effort to boost America’s tire industry and preserve jobs.  An analysis from the nonpartisan Peterson Institute for International Economics shows that with generous measurements, Obama’s increased tariff saved a maximum of 1,200 jobs. But because tire prices increased, an estimated 3,731 U.S. retail jobs were lost because Americans were spending more to buy tires and had less to spend on other retail goods.

Economists are saying that Trump’s plans not only won’t help everyday Americans (who will end up paying more for daily needs) but would also put the world economy in jeopardy.

Thea Lee, deputy chief of staff at the AFL-CIO, told CNBC’s “Power Lunch” last week that “there’s no question” recent trade policies have failed American workers, but she said she worries Trump doesn’t have “very many solutions about where we need to go.”

“His proposals aren’t viable, they’re not practical, and they’re hypocritical — to be honest,” she said, referring to his call for Nabisco to bring Oreo production back from Mexico, while many of his own clothing lines are produced offshore. “There’s no question that we have a terrible disadvantage right now because our trade policies have failed, but obviously he’s talking about policies that would be outside of all our current trade agreements and trade rules.”

Our country was built on the idea that bigger government is never the answer to our problems. Americans who are voting for Trump because they believe he will bring more jobs and a booming economy should take a very careful look at these numbers. Trump’s China plans would be an Obama Administration decision on steroids, a top down approach that will hurt everyday Americans who are already struggling.

UPDATE: Corrected to reflect that the cost to American consumers in 2011 was $1.1 billion, not $1.1 million.